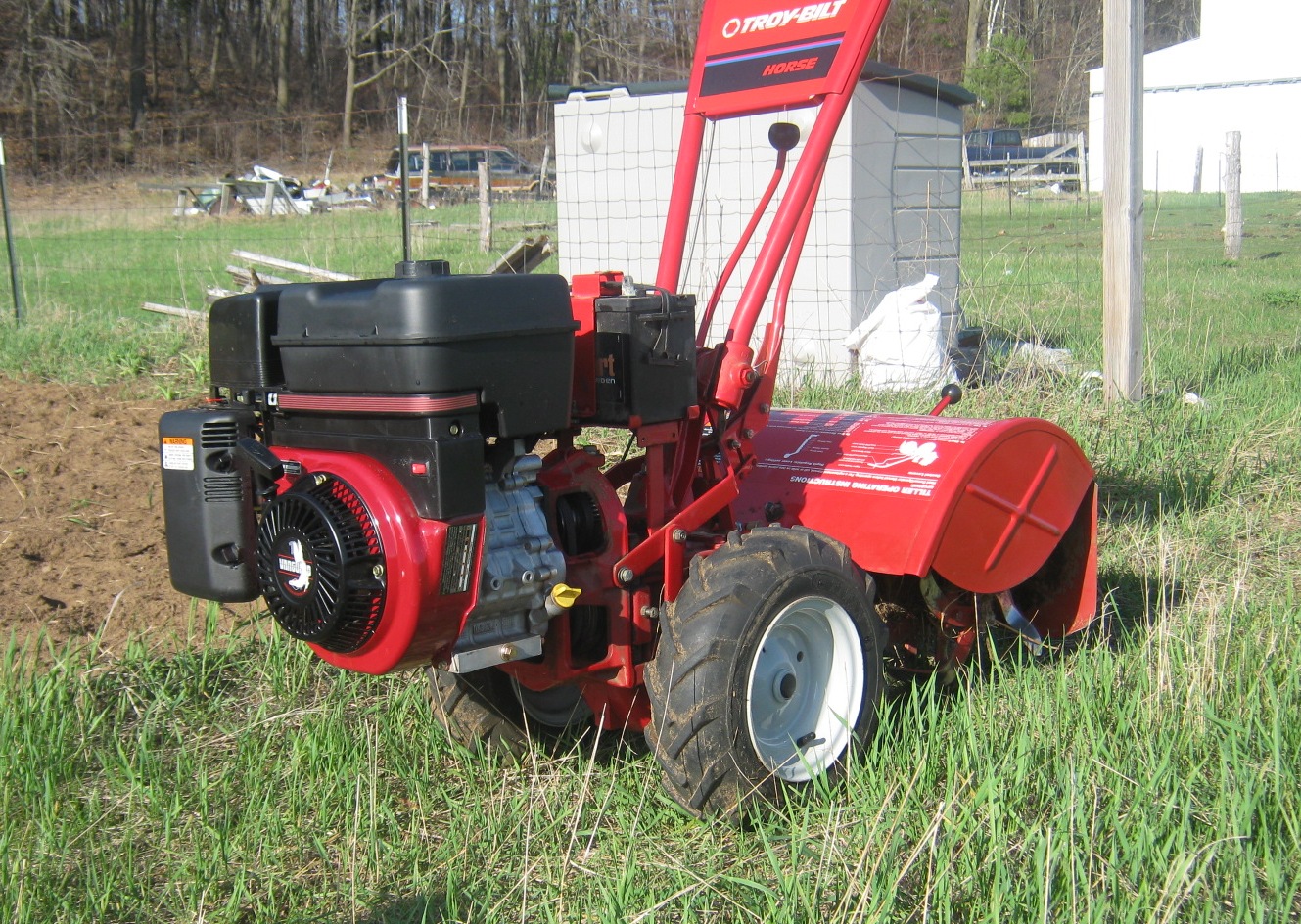 At St. Clare Heirloom Seeds we use a Troy-Bilt Horse Tiller to till our test gardens. Our Troy-Bilt Tiller came new with an electric start 8hp Briggs & Stratton engine. This spring while we were tilling, the engine unfortunately decided to fly apart and we were left with a really nice tiller with a bad motor.

Now we had a decision to make, “what to do with the tiller? “. We decided to get a new motor for it, as it’s still in great shape otherwise.One thing we knew, we didn’t want to get the same motor the tiller already had. While it was an alright motor, we wanted something a little more reliable and enduring. We did some around on the internet and found a company called Small Engine Warehouse. They turned out to be just what we were looking for! Small Engine Warehouse specializes in small engines, repowering older equipment, and they even make it possible to install a different motor on your machine than the one it came with. After checking out our options of motors for our tiller model, we decided on an 11hp Briggs & Stratton Vanguard engine. We chose the Vanguard engine because they are Briggs & Stratton’s industrial line and are thus built much heavier than regular Briggs engines. It has a 1 1/2 gallon gas tank and the muffler is twice as big, which makes your tilling experience easier on the ears! This motor will not just bolt on to the Horse tiller, there are several modifications that need to be made first. The old Briggs motor has a 3/4″ output shaft and the new motor has a 1″ shaft. The other problem was the mounting bolts were a different pattern. Small Engine Warehouse sells the motor with both of these problems fixed. They install a special pulley that has a 1″ hole and there is an adapter mounting plate, with the bolt pattern in the right places

mounted to the motor that makes it easy to mount the new motor to the tiller. We received our new Briggs Vanguard motor only 4 days after placing the order (very nice!) and everything was was in great shape. It took about half an hour to install the new motor, it fits perfect! Now comes the exciting part, firing it up! Wait! “Oh rats! We don’t have any oil.” You do not want to start a new motor up without oil in it. After a run to town we get some oil and now we can try it out.  After two pulls it starts right up! We’re in business! We took it out to the garden to see how it works and the new Briggs Vanguard motor did not disappoint us. It has a more muffled tone than the old motor so you aren’t deaf when you are done tilling, and the motor runs a lot smoother than the old one.

The only potentially problem we have encountered and it’s nothing big, just something to be aware of. The old motor had a 3 qt gas tank, the Vanguard has a gallon and a half gas tank. This can sometimes present an balancing act issue, trying to manage the turns and hills with that extra weight on top, especially when the gas tank is full and the tiller is facing downhill. The plus side is that the tiller is not so heavy to lift when you turn the tiller while tilling.