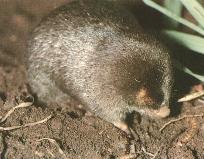 There are several mole species that are found throughout the United States. Moles do not eat plants, but they do eat huge numbers of grubs, beetles, earthworms, and other soil dwellers like Japanese beetle grubs. Moles cause trouble because they harm the root systems of young Heirloom / Open Pollinated Vegetable Plants when they tunnel through the soil in search of food. This damage is compounded by the fact that they can spread disease from plant to plant. In addition, other pests that are more harmful, like field mice, use mole runs. So before you decide to get rid of your moles, consider that they might actually be helping your Heirloom / Open Pollinated Vegetable Garden more than harming it.

When looking for food, moles make a lot of tunnels, many of which they use only once. Vegetable Gardens rich in grubs and earthworms are most likely to be riddled with molehills. Young Heirloom / Open Pollinated Vegetable seedlings in the early spring can be harmed by moles tunneling in search of grubs and other insects. They are solitary animals, and it is likely that only one or two moles are responsible for all the damage in your Heirloom / Open Pollinated Vegetable Garden. Moles are active all year long and when cold weather comes, they follow the earthworms deep into the soil below the frost line. You can tell the difference between mole tunnels and gopher tunnels by the fact that moles do not have the characteristic fan shaped mound at the entrance that gopher tunnels have. 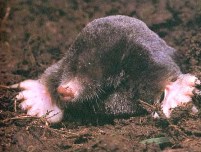 Traps can be effective, but you have to be persistent. The best time to trap is in early spring when the first mole ridges appear. To find out which runs are used alot, step lightly on a one section of several tunnels so that you disturb but do not entirely collapse them. In a couple of days, find which ones are raised; those are active runs and good locations for setting a trap. You can repair the turf over unused tunnels with a lawn roller or by treading on them. Choker traps (such as the Nash mole trap), scissor-jawed traps (such as the Out 0′ Sight), and harpoon traps (such as the Victor mole trap) do catch moles when used properly. When installing these traps follow the instructions that come with them. They spring when a mole sets off the trigger as it attempts to raise a flattened portion of its run.

Digging:
Instead of using traps you can try digging out moles. Moles can be active at any time of the day in your Garden; it is often possible to see the soil ridging up as the mole moves along. Put a shovel into the soil right behind the mole, and flip the animal out into a bucket, which you can then dispose of any way you see fit.

Flushing:
When mole run is short you can try flushing them out with water. Just open the main run, insert a garden hose, and turn on the water. When the water spreads through the tunnels, adult moles will try to escape through other exits, where you can catch them and dispose of them. If you flood the runs in the spring, you will also drown the young in their nest.

Steps to prevent Mole damage in your Garden

Get Rid of Grubs:
Moles like to eat beetle grubs and the beetle grubs like to feed on plant roots. Remove the grubs and your Heirloom / Open Pollinated Vegetable Garden will be less attractive to moles. Beetle grubs can be controlled with parasitic nematodes (sold as Bioquest).

Cat Litter: You might achieve success with the strong odor of well-used cat litter. Dump several scoops of litter right into the moles burrow. A sprinkling of tobacco or red pepper into each burrow may also deter moles.
Mole Evictor: The Mole Evictor is a battery-operated device which vibrates that you set in the soil. The vibrations coming from it theoretically drive moles away for good. For information contact Ryans Company.
GoPherit: Like the Mole Evictor, GoPherlt produces battery powered vibrations that clear moles within a 50- foot radius. It is available from Ryans Company and Ringer Corporation.

Windmills: Windmills also create vibrations and can be set in mole runs. A less expensive alternative is to insert a child’s pinwheel into the tunnel ridge. Empty soda bottles work the same way. Set a bottle straight down into the mole run, open end up. The wind blowing across the opening of the bottle creates vibrations that spread along the mole tunnel.

Rodent Rocks: Rodent Rocks are porous lava stones that have been soaked in an organic repellant containing onions and garlic. When the rocks are buried 6 inches deep and 2 to 4 feet apart. They claim to repel rodents for 4 to 12 months.