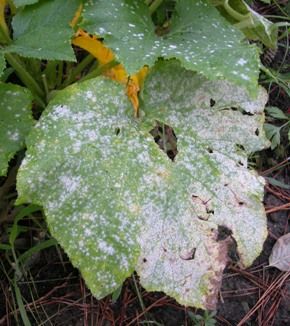 Every year about midsummer, we start getting questions from people wanting to know what those white or gray powdery spots are on their Heirloom / Open Pollinated Vegetable Garden plants. They often cover most if not the entire leaf surface, plant stems, flowers and even fruit. Powdery mildew is a fungus that forms as a white or gray powder on the leaves of vegetable plants causing the leaves to become deformed and die. Powdery mildew can be a real problem in the Heirloom / Open Pollinated Vegetable Garden, especially for cucurbits such as cucumbers, squash, melons and pumpkins. It is far more of a problem in areas that are damp, or somewhat shady, and have higher levels of humidity. It can also be a problem when your area gets an usually long rain spell and the Vegetable Garden plants don’t dry out for weeks.

Powdery Mildew looks like talcum powder, on the leaves and stems of plants. There are actually several types of powdery mildew fungi, but they all look basically the same. You may not notice a problem until the top surfaces of the leaves turn powdery, but powdery mildew can also affect the lower leaf surface, stems, flowers, buds and even the fruit. Vines may also wither and become whitish. It is difficult to control powdery mildew once it begins spreading on the vegetable plant leaves. 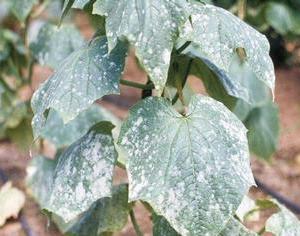 In advanced stages, however, powdery mildew can cause foliage to yellow, curl or turn brown, and eventually defoliate the plant prematurely. On flowering plants and trees, the fungus can lead to early bud drop or reduced flower quality.

Conditions that favor mildew formation include wet foliage, high humidity, low light and moderate temperatures. These conditions cause the vegetable garden plants to never dry out, creating the perfect environment for the powdery mildew fungi. Pro active steps to avoid or minimize this risk include: 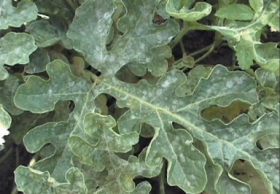 Early detection provides the best way to contain and potentially eliminate the problem. Most conventional, off-the-shelf products are made for prevention and control, not elimination of an existing infection. One of the most common multipurpose fungicides for control contains the active ingredient chlorothalonil. Daconil 2787 is probably the most well-known brand containing this ingredient. Although effective, it coats the leaf surface with a white, milky film that is quite noticeable.