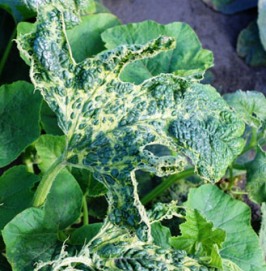 The Mosaic Virus is caused by a variety of viruses which attack all members of the curcurbit family, but especially thrive on Heirloom / Open Pollinated summer squash, cucumber and muskmelon plants. It is spread by a variety of methods and so is a serious disease for garden plants of the curcurbit family. Mosaic Virus diseases are caused by at least five different viruses: 1) cucumber mosaic virus (CMV), 2) squash mosaic virus (SQMV), 3) watermelon mosaic virus-2 (WMV-2), 4) zucchini yellow mosaic virus (ZYMV) and 5) papaya ringspot virus-watermelon isolate (PRSV-W). All five of these Mosaic Viruses can infect all Heirloom / Open Pollinated cultivated vine crops (squash, melons, gourds, cucumbers, pumpkins) and under ideal conditions can cause a high rate of crop failure and severe economic losses. It is not uncommon to have two or more Mosaic Viruses infecting the same garden plant and in these cases, symptoms may be much more severe than if the garden plant were infected with only one virus. It is nearly impossible to distinguish between any of the five Mosaic Viruses based only on visible symptoms. Because of this, it is important to have suspect plants sent to a diagnostic clinic capable of using specialized techniques to identify the Mosaic Viruses that are present. Proper disease management depends on knowing which specific Mosaic Virus is involved.

What does it look like on Heirloom / Open Pollinated Vegetable Plants 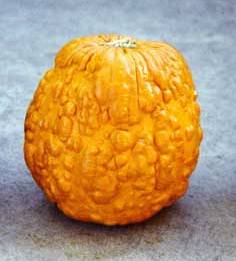 As the names imply, all five Mosaic Viruses cause a mottling of foliage called Mosaic. Depending on environmental conditions, Mosaic Virus symptoms can range from mild to severe and be visible on both leaves and fruit. Mosaic Virus damage first appears in the form of green leaves which look as if they are mottle or distorted. Often these leaves will also be curled upward, or appear as if their growth has been stunted. Typically these leaves will have yellowish spot on them, adding to their mottled Mosaic appearance. If Heirloom / Open Pollinated cucumber fruits are affected, they will vary in color from light green to dark green mottled areas and some which pale to white. Affected areas of the Heirloom / Open Pollinated curcurbit family plants may also be covered with warts or alternately the skins may be have faded and be very white and smooth.

Disease Cycle and Transmission of the Mosaic Virus

Mosaic virus overwinters on a variety of garden plants including debris from curcurbit family plants which were not cleared from the garden, as well as catnip, pokeweed, motherwort, milkweed and wild cucumber plants. Aphids and cucumber beetles spread the Mosaic Virus as they feed, going from infected plant to healthy plant. In most cases these insects get the Mosaic Virus by feeding on weeds or other vine crops that are infected. The insects then feed on non infected vine crops and in the process transmit the Mosaic Virus to the next garden plant. In the case of the green peach and melon aphid, the insect carries the Mosaic Virus on its probing mouthpart’s and the aphid only needs to probe the garden plant to transmit the virus. Feeding by the aphid is not necessary. Once the insect probes one plant, it can move onto the 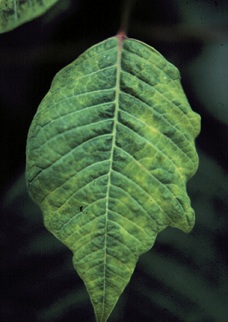 next, probing and infecting as it goes. The more aphids present, the quicker and more complete the Mosaic Virus is spread. By this process, large acreages can become infected quickly. Although the Mosaic Virus can eventually kill off the Heirloom / Open Pollinated curcurbit family plants, the main affect of this virus on the vine crop is that plants fruits will taste bitter, and therefore be inedible. However, garden plants which are infected after the fruit is already half grown typically do not turn out bitter.

There is no chemical control for the Mosaic Virus, and garden plants need to be removed and destroyed quickly if they are infected. To control the spread of the Mosaic Virus disease by cucumber beetles and aphids, you will need to control these insect populations with a diazinon containing insecticide repeating the application as much as necessary in seven day intervals. There is much debate on this though, since aphid vectors need only probe the vegetable plant to transmit the virus, insect control may not really be that effective in controlling the Mosaic Virus. Even if the aphid were to die immediately following probing, virus transmission would still take place. You could also plant Heirloom – Open Pollinated varieties with resistance whenever possible. The availability of Heirloom – Open Pollinated varieties with Mosaic Virus resistance varies depending on the virus and the Heirloom – Open Pollinated vine crop in question. Controlling weeds which could harbor the viruses from areas around your garden. Pokeweed is a primary weed which harbors many vegetable garden plant viruses. Weeds also serve as hosts for insects that transmit the viruses.