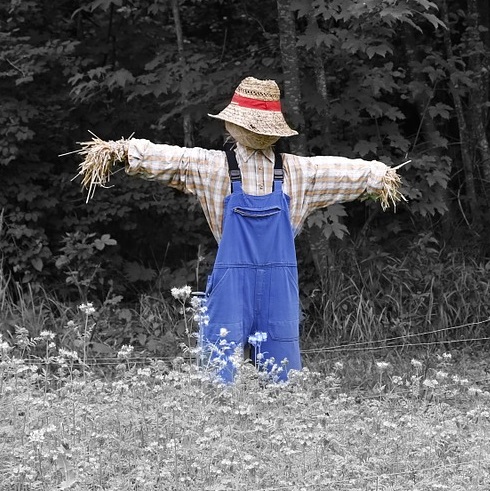 Scarecrows have been scaring birds away, or, in some cases amusing them, for as long as man has grown crops. Some say these whimsical creatures were first used by tribes in central or northern Europe; others claim that Indians were the first to employ them. Wherever the origin, the scarecrow has been used on farms and in Open Pollinated / Heirloom vegetable gardens across the country for many years.

Why build a Scarecrow for your Garden?

Building a scarecrow can be a family event. With just a little straw, wood, and some old clothes, it’s amazing what interesting designs some gardeners come up with. Not only are they guided by creativity, they’re also an excellent way to involve children in the garden. Young would-be gardeners who flinch at the idea of helping in the family vegetable garden are easily overcome by the idea of a scarecrow making project.

Yet, scarecrows do have a serious side, too. Every year birds destroy millions of dollars worth of crops including wheat, corn, sunflowers, and various kinds of fruit. Individual farmers have experienced losses of up to 75 percent or more due to the monstrous appetite of birds. The family Heirloom vegetable garden is a favorite place for birds to hang out, too. Birds pose a threat to tender young plants. Crows, blackbirds, blue jays, and many other winged creatures have been known to swoop down and snatch seedlings from the ground or to peck holes in newly ripened fruit. Thanks to scarecrows, farmers and Heirloom gardeners have a fighting chance to save their crops from being destroyed by birds.

How a Scarecrow Works

It is a common joke that scarecrows attract more birds than they frighten (Wizard of OZ anyone?). Indeed, it is not unusual to see a scarecrow with several birds perched on its shoulders. If properly designed and utilized in your vegetable garden, however, these human look alike’s can be fairly effective in protecting your heirloom vegetable garden.

The idea behind scarecrows is simple. Put up a figure that resembles a human being (One of the birds’ predators), and the birds

will stay away. But there’s a catch, sooner or later, birds wise up and realize that your creative masterpiece will not harm them; in fact, it takes some birds less than a week to figure things out. So you must try to be as ingenious as possible in the short time you have to scare them away. For example, by hanging aluminum cans or other shiny objects from your scarecrow’s arms, you may be able to buy yourself and your vegetable plants a few days time. Noisemakers, including aluminum pie plates banging together in the breeze, can also help to ward birds off a little longer.

How to Build a Scarecrow

To build a scarecrow from scratch, you need only a few materials and a willingness to use your imagination.