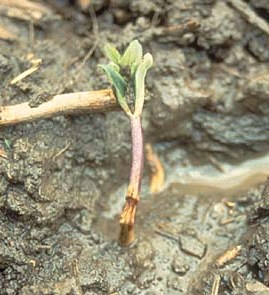 Damping-off is a term used for a variety of fungal problems that lead to sudden seedling death. A soil-borne fungal disease that affects seeds and new seedlings, damping off usually refers to the rotting of stem and root tissues at and below the soil surface. Usually, the plants will germinate and come up fine, but within a few days they become water-soaked and mushy, fall over at the base, and die. The pathogens attack the tender stems and roots of the seedlings. Some seedlings look pinched at the base of the stem, others flop over, and some wither away entirely. Once the process is underway, its hard to save even a few of your plants. Prevention is the best cure against Damping Off.

What Causes Damping Off

Several fungi can cause decay of seeds and seedlings, including species of Rhizoctonia, Fusarium and Phytophthora. However, species of the soil fungus Pythium are most often the culprit of Damping Off. Damping off typically occurs when old seed is planted in cold, wet soil and is further increased by poor soil drainage. High humidity levels, rich potting soils, and planting too deeply will also encourage its growth. Fungal spores live in the soil, and are primarily a problem in seed beds. Damping Off fungi can be transported on garden tools and in garden soils taken into the house or greenhouse. In the greenhouse or seed bed, damping-off can be almost completely eliminated by partially sterilizing the

soil with heat or strong disinfectants. A good job of soil sterilization requires special equipment and is often impossible. Fortunately there are simpler remedies for damping-off when it does appear.

Prevention of Damping Off 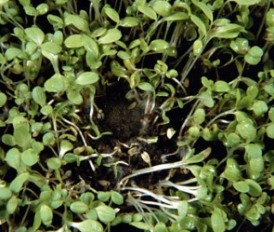 Control of Damping Off

Unfortunately infected seedlings usually die, but sometimes you can save the rest by improving growing conditions by making them as warm and dry as possible. Spray plants with seaweed extract as this will help strengthen them. Strong plants are more resistance to Damping Off. Spraying plants with Neem oil or misting seedlings with an anti fungal solution will also help protect your seedlings. You can also try one tablespoon of 3% hydrogen peroxide per quart of water and mist or spray it on the plant. You can also brew strong chamomile tea and add an ounce or two per quart of water. Do not try to stop damping-off with acids, compounds containing chlorine, or wood ashes. Chemical treatment with metalaxyl as a seed treatment (Apron) or as a soil treatment (Ridomil 2E) can be used to control Pythium Damping Off in the field.